I got into a fight with Iraj.

Over Enforced disappearances and extrajudicial killings.  Anti-climatic, I know.

I must admit, growing up, I often found myself listening to Iraj’s music . We sang his songs from the back of the leyland bus during school trips and found ourselves rather miserably break-dancing to his music with other kids at annual “parties” we had in school when the academic year ended!

So when I found myself in the middle of a Twitter feud with him, it was rather …. well awkward.

Of course celebrities, like the rest of us, are entitled to their political views but it turns out, Iraj genuinely believes that the primary solution to crimes taking place across the nation is enforced disappearances and extrajudicial killings and is religiously advocating for the authorities to restart the notorious white van abductions.

Not only does our beloved pop star believe that disappearances should be enforced on criminals, but also those with different forms of dissent. What does he invoke to justify this… “patriotism”, of course.

(I was just playing along for fun to be honest! I don’t have a position on LTTE leaders being given high posts in the government. On the one hand, if they’re responsible for war crimes and such (which they are), they need to be held into account with any others in government who have similar accusations, on the other hand it’s also positive that people who felt the need to take arms against the state enter a democratic process.)

Due to decades of armed conflict, two youth insurrections, a tsunami and years of political instability, Sri Lanka has thousands of “missing people”. According to one UN report from the 1990’s, after Iraq, Sri Lanka has the most number of disappeared people in the world.

White van’s were used as a political tactic to abduct critics and dissidents of the then Rajapaksa government from their homes or off the streets.

Those abducted were never seen again. Most victims are believed to have been tortured and killed. White van’s without number plates became a symbol of terror and impunity. The LTTE also used abductions as a tactic of war on those in the military as well as civilians. There are also some reports that such abductions continue under the Yahapalana government.

Families fall apart as there is no closure for relatives and loved ones who are unsure if the victim will ever return. Many still find it difficult even to access benefits which would be available in the event of a death of a family member as they cannot prove the death of their loved one. The chilling effect, however, is not just on the victim and the family, many people resort to self-censorship due to fear.

Mahinda Rajapaksa himself was a prominent anti-disappearance activist during and in the aftermath of the 1987 – 1989 JVP led Marxist insurrection and the then UNP Government’s crackdown on the same where thousands of young people who were members of the JVP or suspected of being such were abducted from villages across Sri Lanka’s South. Many weren’t seen again. The Paada Yaathra which Rajapaksha organized with his then colleague Mangala Samaraweera, which both Iraj and I are too young to remember, travelled from Colombo to Kataragama in the island’s South bringing attention to these disappearances. Rajapaksa also travelled to the UN Office in Geneva to lobby Diplomats at the then UN Human Rights Commission on the issue of disappearances in Sri Lanka. The UNP then accused him waging an international conspiracy against Sri Lanka. Sounds familiar?

Iraj and others believe that crime rates in Sri Lanka are on the rise. While this is not hard to believe; it’s far from being true. Because of the exponential expansion of information communication technologies which have shaped how we consume news, we are exposed to a lot more information than we traditionally have and seeing news reports of crime scenes on SMS news alerts, Facebook, Twitter and prime-time news bulletins can make anyone believe that crimes in Sri Lanka are on an upward trend. However, if one compares the grave crimes in police reports in 2017 (35,978) to the same statistic in 2014 (50,962) the number of crimes has substantially reduced. If you go back to 2006 it’s as high as 61,196. Almost double as it is now. All this information is publicly available in the Sri Lanka Police website. 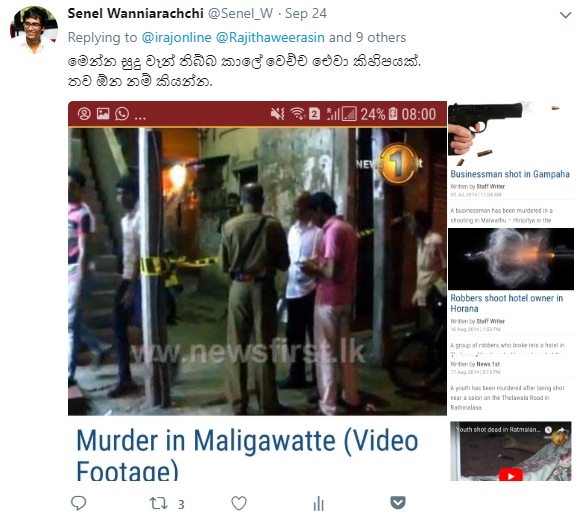 Iraj, and others who believe disappearances are the most practical method of dealing with crimes and dissent find them utilitarian —have the greatest good for the greatest number of people. This is of course, until, you or someone you care about, face a similar situation.

For me (and others), its flabbergasting that, in 2018, a celebrity can publicly advocate for enforced disappearances and extra judicial killings. It’s a crime under Sri Lankan law and international law and advocating for the same should also be a crime. The government has set up at Office of Missing Persons investigate into disappearances as part of the process they call post-conflict transitional justice and when people with substantial social influence like Iraj speak out against it, it could harm these processes which many are already sceptical about.

It’s equally disappointing that there aren’t many mainstream celebrities with the kind of reach that Iraj has, who use their art, influence and social capital to speak up against enforced disappearances and on the pain anguish of the families and the loved one’s of the disappeared and their right to know the truth, to hold those responsible into account and access reparations. 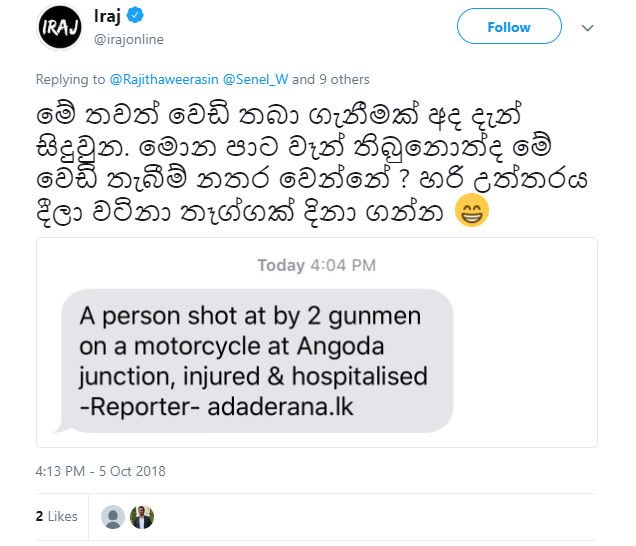